“When eight days were completed for His circumcision, He was named Jesus, the Name given Him by the angel ….”

On the eighth day of Christmas—the Octave Day of the Lord’s Nativity—we honor the Blessed Virgin Mary as Theotokos:  “God bearer”, or more commonly translated into English as “Mother of God”.  Out of the five mysteries of Christmastide—the Nativity of the Lord, the Holy Family of the Lord, the Theotokos [Bearer of the Lord], the Epiphany of the Lord, and the Baptism of the Lord—today’s mystery focuses more squarely on the person of Mary herself.  Of course, this focus cannot possibly exclude her Son.  The very title “Theotokos” recognizes Mary in relation to the One whom she bore.  This act of bearing is the key that unlocks the mystery of today’s feast.

However, today’s Gospel passage doesn’t relate a scene from Mary’s pregnancy:  that is, from the time during which she bore the unborn Christ.  The Church might have chosen the Gospel passage of the Annunciation for today’s feast, or the Visitation, or a passage relating to Mary’s seeking a place to give birth.  Instead, today’s Gospel passage describes the scene on the eighth day of the Lord’s life “in the world”, as distinct from that part of His life that was hidden in the womb.

St. Thomas Aquinas, in the Third Part of his Summary of Theology, discusses the Circumcision of Jesus in Question 37.  Consider how it is that faith is the means of access to the grace that flows from the Passion.  In Thomas’ Summary of Theology, when he asks “Whether circumcision was a preparation for, and a figure of Baptism?”,[1] his affirmative response is based upon the fact that “Baptism is called the Sacrament of Faith”, and he illustrates this fact with two examples:  that “in Baptism man makes a profession of faith, and by Baptism is aggregated to the congregation of the faithful.”[2]

Then St. Thomas compares the Old Testament rite of circumcision to Christian Baptism, and he makes this comparison by highlighting faith’s role in the rite of circumcision.  He first asserts that the faith of Christians “is the same as that of the Fathers of old, [that is, the Old Testament patriarchs,] according to the Apostle (2 Cor 4:13):  ‘Having the same spirit of faith … we … believe.’”[3]  Then Thomas describes the spiritual act and the spiritual effect of circumcision.  The act of circumcision was a profession of faith, and the effect of the act was that “men of old were aggregated to the body of the faithful.”[4]

Given these doctrines that Thomas has articulated about the Old Testament sacrament[5] of circumcision, what then can we say in particular about the circumcision of the divine Person of Jesus, and the Theotokos?

Freely, the divine Person Jesus was obedient to His Father’s Will and entered this world whose inhabitants are yoked by sin and death, to which yoke the Law testified.  Of her own free will, the human person Mary, free from all sin, was obedient to the Father’s Will and accepted the vocation to be the Bearer of the God-man, who had been born of her and “born under the Law, to ransom those under the Law.”  Mary’s vocation was for the sake of this ransom.

However, this ransoming that was fulfilled on Calvary, served a further purpose:  namely, that the very sinners who had been yoked to sin and death might enter into the fullness of life as children of the God-Man’s own Father.  The Beloved Disciple testifies to this truth in the prologue to his Gospel account:  “to all who received [the Word], who believed in His Name, He gave power to become children of God”.[6]  Mary herself, of course, is the initial and purest example of this reception of the Word in her obedience to her unique vocation to serve God and mankind as the Theotokos.

On the eight day of His manifestation within this world—that is, one week after the epiphany of His Birth from the ever-Virgin Theotokos—the Word made Flesh was circumcised according to the Law.  This act of obedience to the Law, as an Old Testament sacrament that foreshadowed Christian Baptism, derived its efficacy from the prevenient grace that flowed from the Passion of the Word made Flesh on Calvary, and by means of faith.  Faith is the final word of today’s celebration of the Christmas mystery of the Circumcision of the Lord, and Mary speaks this word in her role of Theotokos:  God-Bearer.

Faith, as a divine virtue whose object is God, cannot be practiced by a divine Person such as Jesus Christ.  However, every human person is called by God by means of faith to receive God the Father’s Word, to believe in that Son’s Name, and to receive God’s power so as “to become children of God”.

Faith, within the spiritual womb of Mary’s soul, is the means by which she gave her “Fiat” to the Father.  Through this “Fiat” within the womb of her soul, she bore the Word who became Flesh through her.  So each human sinner is called through the divine virtue of faith each day of his life within the Church Militant to bear the Word in his soul, to become a child of God, and to begin anew his own vocation within the Mystical Body of Christ.[7] 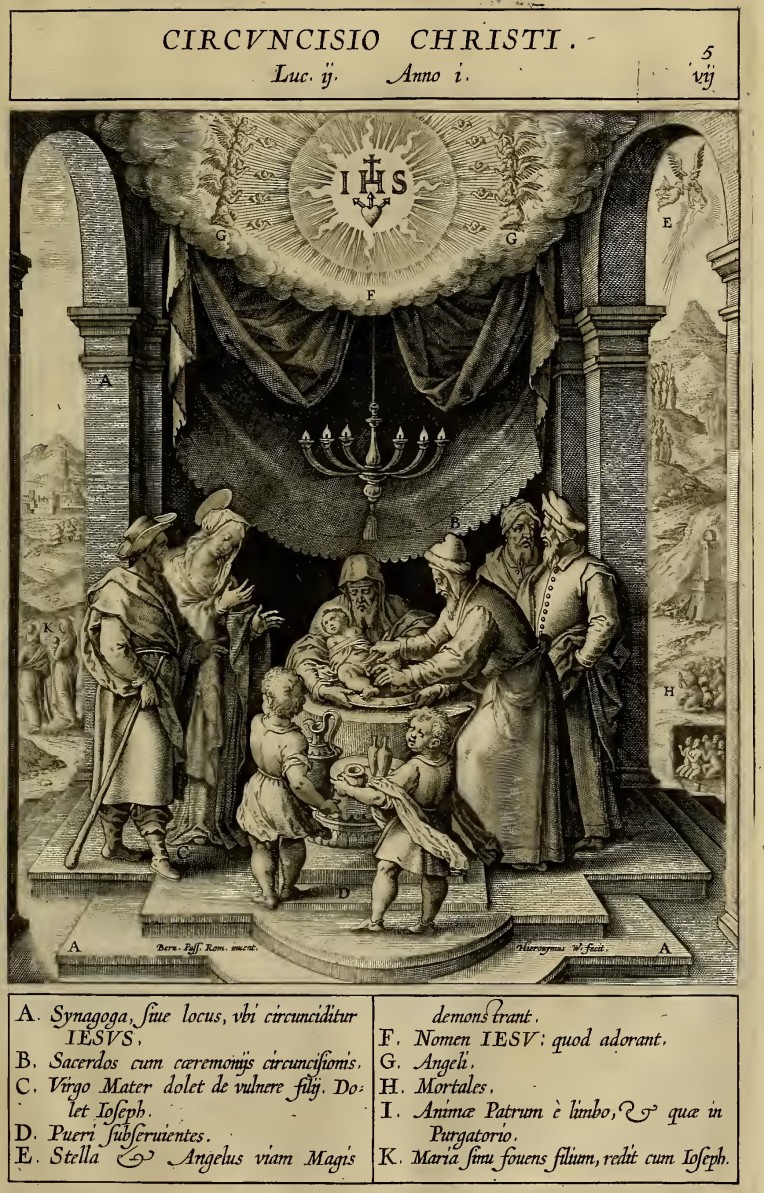 [4] In the edition of the Summa cited in footnote 6, the English translation speaks of a “protestation of faith” [“protestatio fidei”].  However, “profession” is not only an adequate synonym for “protestation” here, but also relates more closely to the current language used to describe the liturgical act of a “profession of faith”.

[5] St. Thomas in Question 70, Article 2, Reply Obj. 2 uses the word “sacrament” to speak of the ritual of circumcision:  “Circumcisio autem erat sacramentum….” (“But circumcision was a sacrament….”).

[7] This reflection has not treated the second half of the verse cited at the homily’s beginning, but its spiritual theme—that is, the Holy Name of Jesus—is celebrated in the Sacred Liturgy on January 3 in the Ordinary Form and on the Sunday after today’s feast in the Extraordinary Form.