“Blessed are the poor in spirit, for theirs is the Kingdom of Heaven.”

Beginning today and for many days to come, we hear at weekday Mass from the Sermon on the Mount.  This sermon is one of the chief features of St. Matthew the Evangelist’s Gospel account.  As such, the sermon illustrates Matthew’s portrait of Jesus:  Jesus as the living fulfillment of Moses.

Moses was the prophet who led God’s People to an earthly salvation in the Old Testament:  from physical slavery in Egypt to freedom in the Promised Land.  But Jesus effects salvation in an infinitely more profound way.  So while many features of Jesus’ life and ministry echo the role of Moses, at the same time there are discrepancies between the two of them which point out how Jesus fulfills what Moses could only foreshadow.

Note in today’s Gospel passage two points of the evangelist’s “setting the stage” for the Sermon on the Mount.  First, Jesus “went up the mountain”.  This act is reminiscent of Moses ascending Mount Sinai to receive the Law from God.  However, where Moses must receive the Word of God before teaching it to the people, Jesus is the Word of God!  Jesus teaches “from the heart” of His divinity.

Second, note that “after He had sat down, His disciples came to Him.”  The fact that Jesus sits down points out that Jesus is a teacher.  In ancient cultures—contrary to our American experience—a teacher would sit while the students would stand.

More significant, though, is that “His disciples came to Him.”  Moses had to descend the mountain in order to share with the people the Word he had received from God.  Later, God declared that if anyone should even touch the mountain that he must die.  Then when Moses descended to teach the people, he found that they were worshiping an idol!

But Jesus invites His disciples to join Him up on the mountain.  This contrast to Moses suggests that Jesus will teach in His great sermon something profoundly interior.  He wants His disciples to join Him on the mountain, symbolizing that He is inviting them to climb:  that is, to transcend everything that is of the earth.  So Jesus invites us today to ascend to the Word of God, and through His words, closer to the heart of the Father’s divine life. 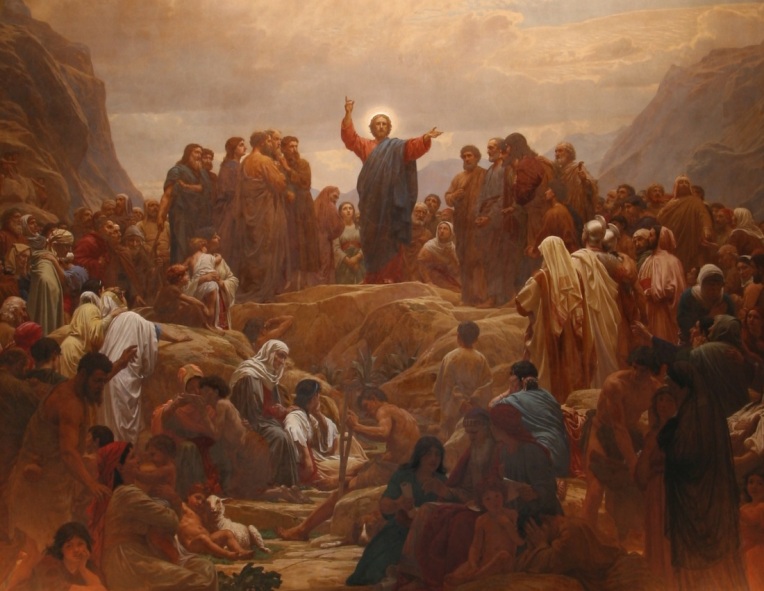