“Now I have seen and testified that He is the Son of God.”

Today’s passage from the First Epistle of John seems, at least at first hearing, to focus upon the relationship between God the Father and the disciple who is the Father’s adopted child.  St. John speaks of two distinct ways in which the disciple is God the Father’s child.  On the one hand, he states that “everyone who acts in righteousness is begotten by Him.”  On the other hand, he exhorts his listeners to “[s]ee what love the Father has bestowed on us that we may be called the children of God.”

We might reflect for a long time upon these two, which seem to focus upon, on the one hand, good works, and on the other hand, divine love.  The Beloved Disciple, of course, does not says that the disciple’s acts of righteousness are what make her a child of God.  This is no more possible than a child giving birth to herself.  The Beloved Disciple simply states that authentic righteous acts are signs of one who has been begotten by the Father.

On the other hand, the Beloved Disciple does state that the Father’s caritas—that is, His very self—is the source of His begetting.  “See what love the Father has bestowed on us that we may be called the children of God.”

Nonetheless, this distinction is not the heart of today’s passage from 1 John.  The Beloved Disciple makes a further distinction when he states:  “Beloved, we are God’s children now; what we shall be has not yet been revealed.”  So then, as it is in earthly life, it is also in the spiritual life:  childhood prepares for something greater.  St. John elaborates on this point through his next sentence:  “We do know that when it is revealed we shall be like Him, for we shall see Him as He is.”

Each of us, “when it is revealed”, will be like the Father.  We shall be like Him.  We shall share in the life of the Father, “for we shall see Him as He is.”

Yet another way to meditate on the truths of today’s First Reading is to use a basic principle of Scripture study:  namely, to hold up two passages from different parts of the Bible to the same light, in order to see how those two complement each other.  In this case, we can turn to a passage from the fourteenth chapter of the Beloved Disciple’s Gospel account.  The setting is the Last Supper.  The Beloved Disciple records this exchange between St. Philip and Our Lord:

Philip said to [Jesus], “Master, show us the Father, and that will be enough for us.”  Jesus said to him, “Have I been with you for so long a time and you still do not know me, Philip?  Whoever has seen me has seen the Father.  How can you say, ‘Show us the Father’?  Do you not believe that I am in the Father and the Father is in me?  The words that I speak to you I do not speak on my own.  The Father who dwells in me is doing his works” [John 14:8-10].

It is because we see the Incarnate Son of God that we see the Father.  It is by truly living in Jesus that we may live now as children, yet in a day to come as sharers in the life of God the Father Himself, in an even more full manner. 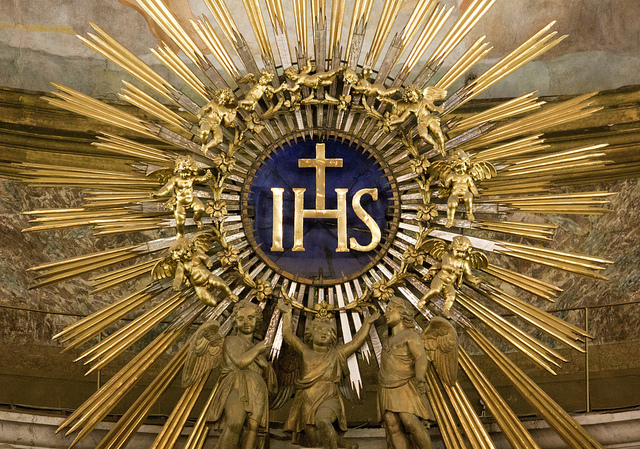