“…with length of days I will gratify him and will show him my salvation.” [Psalm 91:16]

Today’s Responsorial—taken from Psalm 91—has two distinct parts, or voices.  The first strophe is verses 1 and 2 of Psalm 91, and here the Psalmist speaks to the believer.  But the second and third strophes consist of the final three verses of the psalm, in which the Lord Himself speaks about the believer.  This shift in voice is significant, but also helps us understand something about the psalter.

Saint Augustine of Hippo, in his second exposition of Psalm 91, notes that “[s]ometimes a psalm… speaks of Christ in such a way that it clearly refers to the head alone; but sometimes it passes from the head to the body, by which I mean the Church….  This happens because the head is not separated from the body, so scripture speaks of them as one sole person.

“I will give you an example of what I am talking about, dearly beloved.  There is a psalm where Christ’s passion is described in a manner plain to everyone:  ‘They dug holes in my hands and my feet; they numbered all my bones.  They shared out my garments among them, and cast lots for my tunic.’[1]  Even the Jews are embarrassed when they hear these verses, so very obvious is it that the prophecy refers to the passion of our Lord Jesus Christ.

“Yet though our Lord Jesus Christ was free from sin, at the opening of that same psalm he says, ‘O God, my God, why have you forsaken me?  The tale of my sins leaves me far from salvation’.[2]  You can distinguish between what is said in the person of the head, and what in the person of the body.  The sins belong to us; the suffering undergone for our sake belongs to the head.  But in virtue of the passion He endured for us, the sins that belong to us are blotted out.  The same principle holds for our present psalm.”

Keeping this general principle in mind, reflect then on the latter three verses of Psalm 91.  St. Augustine calls these verses “God’s promises to His Church.”  In the final phrase of the psalm, the Lord declares of the believer:  “I will show him my salvation.”

“But Christ was not seen then in the way that we shall see Him.  He was seen in such a way that it was possible for those who saw Him to crucify Him. … When will be the time for our seeing?  When we behold Him ‘face to face’[3], as the apostle says.”

“Whatever your labors may be, labor for this end, that you may see. … He was seen once in His lowly state, but then He will be seen in His greatness and will fill us with joy.”

“Let us long for Him and love Him, if we are His bride.  The bridegroom is absent, but let us hold out patiently, for He whom we long for will come.” 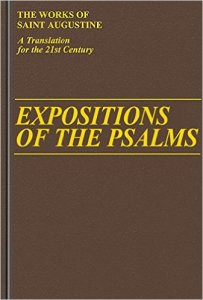